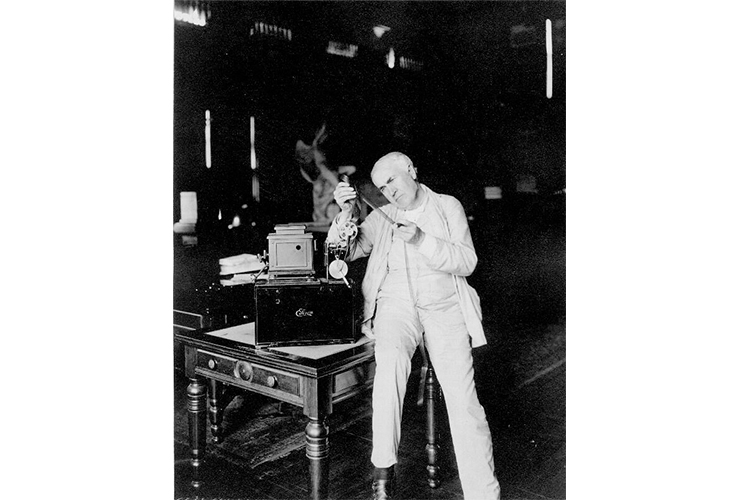 INNOVATION THROUGH CURIOSITY, RESILIENCE AND PERSISTENCE​: A LOOK AT THE LIFE OF THOMAS EDISON

Curiosity is having an intense interest in how things work and interact with other things, what things do  and don’t do, and in general knowledge about anything.  A curious person wants to learn more about  things and isn’t satisfied with a cursory overview of something. A curious person is rarely bored.

Resilience is the ability to bounce back after a set‐back.  Resilience may be the most important skill to  have in life.  Resilience gives people the ability to overcome emotional distress, job losses, bad teachers,  abusive family and friends, having your perfect idea shot down, and even waking up one day and  realizing you have been going down the wrong path.  I propose that there is no innovation without resilience.  We are currently working with a client that had  organizational resilience when they completely changed their business from consulting to software in  order to follow economic opportunities.  But that is a topic for another post.  This post is about an  individual who overcame poverty and personal set‐backs to persevere until he achieved success.  I think  that if we could figure out how to build resilience in people, we could help the disadvantaged overcome  their circumstances and build a better world for all. Resilience may not lead directly to innovation  without the other characteristics: curiosity and persistence.  If every individual had at least one person who believed in them and their capabilities, and who sparked  their curiosity, resilience and persistence, perhaps we could solve the world’s challenges, while leaving  no one behind. If we think that we cannot do something, we will not be able to do it.  Conversely, If we  think that someone else believes that we can do it, we may try and try again. Those old clichés “if at first  we don’t succeed, try, try again” and “practice makes perfect” are based on the reality that success and  perfection happen when we have curiosity, resilience, and persistence.  Persistence is possible when we  are curious and resilient and when we have someone who believes that we are capable.

Thomas Edison is a role model for innovation through curiosity, resilience and persistence.  This may  surprise you, but Thomas Edison had no formal education.  His mother home‐schooled him and believed  that reading would help him follow his own interests.  Wikipedia suggests that Edison credited his  education to reading R.G. Parker’s “School of Natural Philosophy” and “The Cooper Union for the  Advancement of Science and Art.” His two favorite pastimes were reading and experimenting.  As a  young man, he worked at night so that he could study by day.

His first opportunity came from the father of a three year old boy whom Edison saved from walking in  front of a moving train.  The father, J.V. MacKenzie, was so grateful that he trained Edison as a telegraph  operator, launching his scientific and entrepreneurial careers. On the train, he studied Qualitative  Analysis and conducted chemical experiments.  According to Wikipedia, he obtained the exclusive right  to sell newspapers on the train.  He hired help and launched his first venture, writing, publishing and  selling newspapers. Altogether, Edison founded 14 companies including General Electric (GE). The second man to support Edison was Franklin Leonard Pope, who allowed the poor young man to live  and work in the basement of his New Jersey home, while working by day at the Gold Indicator Company.  Eventually, Pope and Edison started their own company in 1869, working as electrical engineers and  inventors. It should be noted that Thomas Edison’s career was not without failures. He was the cause of a near  miss train accident.  Getting fired from the trains led him to moving to NY to work with Gold Indicator  Company. Spilling battery acid that dripped through the floor onto the desk of his boss below, led to his  being fired from Gold, which led to founding his own company with Pope in New Jersey.

Later, Edison created the first industrial research laboratory in New Jersey. I think that it’s important to  note that Edison’s workshop was a big open room with perimeter shelves filled with both mechanical  and natural parts and pieces. All of the scientists and engineers that he employed “played” with all of  the parts. Sounds like the first maker space!  Edison knew that he didn’t have all of the answers; that it  took a team.  Of course, in the US in the late 19th century, it was a team of all white men, as far as I can  tell.

Edison kept a quote over his desk (and in several other places in his laboratory building) by Sir Joshua  Reynolds, “There is no expedient to which a man will not resort to avoid the real labor of thinking.”

Thomas Edison was not the only one working on creating the incandescent light bulb with use of a  carbon filament. But Edison and his team were the first ones to discover that with carbonized bamboo  (inspired by a fishing trip) they could create a bulb that could last for 1200 hours.  The patent was filed  before the bamboo discovery, but they referred to the filament as carbonized cotton, wool, etc. So his  bamboo discovery was protected by patent.  This led to his work on providing reduced voltage direct  current energy to homes. Edison was also the originator of sound recording, although his initial concept  of tin foil over a cylinder didn’t work very well. He and his team worked hard to improve their own  technological breakthroughs.  Legend has it that it took over 1,000 tries to get the lightbulb right.

Visit the Dibner Institute of Science and Technology, now located in California, but formerly located at  MIT in Cambridge, to see a rare collection of (breakable) Edison lightbulbs. Thomas Edison achieved fame and fortune on a foundation of a love of learning, insatiable curiosity,  resilience from setbacks, having several mentors along the way, and persistence to keep trying until he  achieved working prototypes.  His success was not made through individual achievement alone, but with  a team of like‐minded, hardworking colleagues.

Curiosity, Resilience, Persistence and Teamwork were keys to Edison’s achievements.  If you have an  architecture or Interior Design Project that needs a team of curious, resilient, persistent and  collaborative people, please call us or click on the contact us button on our website.  We would love to  hear from you!​