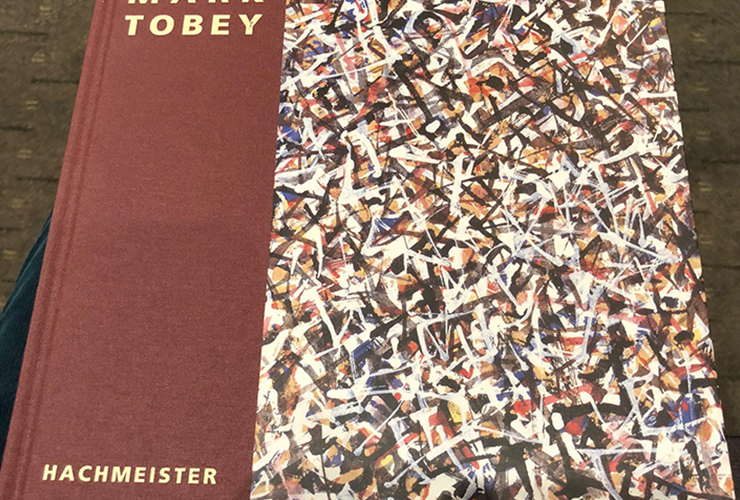 One of my favorite small art museums is the Addison Gallery of American Art at Phillips Academy in Andover, MA. The current shows are not to be missed. The featured show is called: Mark Tobey: Threading Light. After seeing the show, one realizes that the gallery notes are correct: Tobey has had the “most significant yet under-recognized” influence on abstract expressionism and mid-20 th century American Modernism.

At the top of the stairs, the first painting you see immediately brings to mind the work of Jackson Pollack. Although Pollack insisted that he was not influenced by Tobey, Pollack’s friend recalled that Pollack went to see every Tobey exhibition, and then he would come back to his studio and paint like crazy. Pollack may not have been INFLUENCED by Tobey, but it sure seems like he was INSPIRED by his work.

There is a wonderful painting by Jackson Pollack in an adjacent gallery at the Addison. Painted in 1949, you can use this piece to compare Pollack with Tobey’s work of the 1940’s. Some of the Tobey paintings look flat and calligraphic in comparison to the Pollack canvas that has tremendous energy and depth. Most of us have heard of Jackson Pollack, but I was surprised that I didn’t know more about Mark Tobey. Tobey influenced or inspired a generation of artists who were 20 years younger than he was. They did not copy him, but they certainly appreciated his work and he offered new ideas for their own exploration.

Let’s look at the historic context of Mark Tobey. Tobey was born in 1890 (Picasso was born in 1881, Jackson Pollack in 1912). In the field of architecture, Frank Lloyd Wright was born in 1867, Mies van der Rohe in 1886, Le Corbusier in 1887, Philip Johnson in 1906, IM Pei in 1917, Frank Gehry in 1929 (note: Pei is still living, and Gehry is still practicing!) These stars of art and architecture were the millennials of the turn of the 19 th to 20 th century. They were open to new ideas in a way their predecessors were not.

Frank Lloyd Wright was influenced by his love of all things Japanese. Picasso introduced African Art to the European world. Tobey was based in Seattle, but he wanted to travel, and did so all around the world. He studied Chinese calligraphy starting in 1921, and later in the 20’s studied Arabic and Persian writing. He converted to the Bahai Faith in 1934 after which he studied Japanese calligraphy. You can see the INFLUENCE and INSPIRATION of this world view and interest in Middle Eastern and Eastern calligraphy. (Is this SYNCRETISM at work?) The Addison Gallery smartly exhibits several global artists on the first floor that are organized to be “in dialogue with the Addison’s retrospective or Mark Tobey.” One, Moroccan photographer Lalla Essaydi, writes Arabic letters over all of the tableaux that she photographs – the walls, floors, draperies and skin/bodies of her models. Words have power, and her lettering has power. Her work resonates well with Tobey’s work.

Tobey was not the first modernist, nor was he the first (nor the last) to be influenced by other cultures in the world. But he will be seen as a masterful artist once you visit the show at the Addison Gallery. If you go, don’t miss the 1952 Tobey “art” film playing in the library on the first floor. He starred, directed, and even composed the music for the short film. It captures the mid-20 th century vibe perfectly. The film brought back memories of the short films by RISD students when I attended college there in the 70’s. There may be nothing new, only variations of what already exists. Have you been INFLUENCED or INSPIRED by any of the architects and artists mentioned here?

If you are interested in learning more about how Leslie Saul & Associates uses influences from around the world in the fields of art, literature, architecture, and even science to design space for our clients, please call.​