When and Why did Pink and Blue get Assigned Genders?

When and Why did Pink and Blue get Assigned Genders?

The topics of gender roles and gender identification are always worth exploring further. Considering the beginning
of pride month, these concepts are especially poignant and relevant. Here, Leslie explores the concept of pink and
blue being assigned to genders and how it has evolved over time.

My niece, an MD, had a baby on May 4, 2022. Until that day, she did not want to know its gender. Her baby registry was filled with gender-neutral color selections. What does that mean today? No pink, no blue. When I had my son, more than 34 years ago, I too tried to avoid the boy gender standard pastel blue (Although I did buy a gorgeous baby blue sweater-coat that made his blue eyes look amazing). People looking into the carriage would often say, “What a beautiful girl!” At first, I corrected them, then I realized that it didn’t matter, and that I had not given them the societal cues that would have helped them ascertain gender.  I learned to say to other parents of little ones, “What a beautiful baby!” This was in the late 1980’s.

Spin forward to 2022.  I was a guest in aBoston Public School kindergarten class to teach quick session about what makes a city, and then help the kids design a building for that city. I asked some of the kids what their favorite color was, and a few boys answered “pink”, and a few girls liked “rainbow”. Parents are doing a great job of making all colors available for admiration by all children.

This brings me to the question, “When and why were colors assigned to genders?”

The second question, why, is not surprising.  According to the April 7, 2011 Smithsonian magazine’s wonderful article by Jeanne Maglaty, the first citing of gendered color appeared in the June 1918 issue of Earnshaw’s Infants’ Department, a trade publication. A trade publication!  Later in the same article, Maglaty says that in the 1980’s the big push for gendered merchandise led to higher sales. She said that as an example wealthier families would buy everything in pink for their first child, a girl, and then everything in blue for the next child, a boy.  We can see the answer of why is to increase sales (think Professional sports jerseys. Team Girl vs. Team Boy).

The question of when is even more interesting when un-packed.  Before 1918, did you know that all babies wore gender-neutral white dresses until the age of 6? This is why when you see paintings of babies from before 1918, you can’t tell if it’s a boy or a girl unless you look at the museum tag.

We know the citation from Earnshaw’s Infant Department was from 1918, but the color assignments were reversed from what we know today! Pink was for boys, because it was brighter, and Blue was for girls, because it was quieter. AAARRRGGGHHH! Technology was responsible for Pastels overcoming the traditional gender-neutral white, because laundering techniques improved so that pastels could be washed without bleach and still get clean.

The post-war 1940’s and 1950’s was the heyday of colors assigned to genders, reversed to what we know of today as girls’ pink and boys’ blue, but then, as all baby-boomers know, came the 1960’s and 1970’s. Feminism on the ascendance, women burning bras, and women wearing pants to look like they could do whatever men could do. Do you remember those decades? Baby clothes were also more neutral to reflect the desire for gender equality. Pink was out of step with the world.

How things changed in the 1980’s, when the little girls who grew up without pink or lace, wanted it back.  They wanted to be female doctors, lawyers, and politicians, who were also feminine, and they wanted their babies to be back in pink and blue according to gender. Maglaty also notes, and I observed firsthand, that now the blue merchandise had a bear holding a football, really gender stereotyping the garment.  I had my son in the 1980’s, and we resisted the gender colors for a while, until his inner cowboy came out at age 4. He is now married and has two daughters, one of whom loves pink, and the other purple. What can I say?

Back to my niece Lily.  Her baby is a beautiful boy named Reuben. He has lots of gender-neutral things around him, but more importantly, he has a big circle of family and friends who love him. 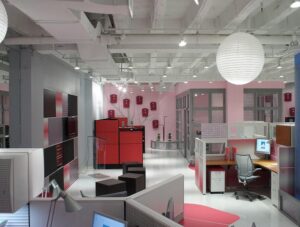 Do you want a colorful life?  Is there a color you are curious about? Do you have any questions about what colors to use where you work, play, age, live and/or learn? Then give us a call or write us an email.  We love colors and we love figuring out their effect on the people who are around them. We promise to not be restricted by gender assignments.

Here are the links to read the articles that I used for background for this post: